image via Southern Living
.
As a young woman, my mom’s mantra was, “Burn your bra and bury your television.” I love her idealism, and I respect her sentiments entirely, but my less radical mantra is more like, “it’s my party and I’ll color code my bras, and binge watch Mindy if I want to.”  That said, in today’s digital age, with the world literally at my fingertips, the temptation to get totally lost behind the tele has never been greater. I’m beginning to understand what my mom was talking about.
.
I’m not sure when exactly I became a full-on Martha, but with a background in film, I do know why I’ve spent a considerable amount of my life in front of a screen. My husband is a film producer, so we don’t own one giant television, we own two. Although I happily share his enthusiasm for Netflix and have yet to miss an episode of G.O.T, it has become increasingly important for me to limit mindless consumption. No, I’ll never give up my favorite shows (currently Transparent, Silicon Valley and John Oliver), but as new interests become more of a priority, it’s easier to walk away from a Million Dollar Listing marathon.
.
In addition to curbing my television appetite, I can’t help but cry a little on the inside every time I walk into my living room and see a 60” black box staring at me. The designer side of me has always struggled with this contemporary special dilemma.  In the interest of simplicity, minimalism and an attempt to tune out the noise, I’ve done a roundup of great hidden storage ideas for a flat screen TV.
.
Here’s a sample of my current inspirations:
. 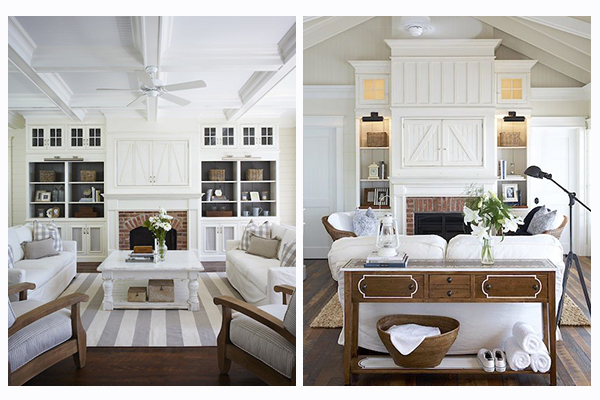 These beautiful coastal homes by Muskoka Living showcase beautifully designed living spaces that are both country chic and simply sweet. I love the charming shutters in these spaces that flawlessly hide televisions above the fireplaces. .
I am currently obsessed with this simple and fully integrated cabinet and bookshelf combo via The Glamorous Housewife. Bethany Herwegh has really done it right with this space. This colorful abode is so inspiring, and I love that the room arrangement centers around the coffee table. The television is neatly tucked away behind the folding shutters with a uniquely utilitarian mantle.
. 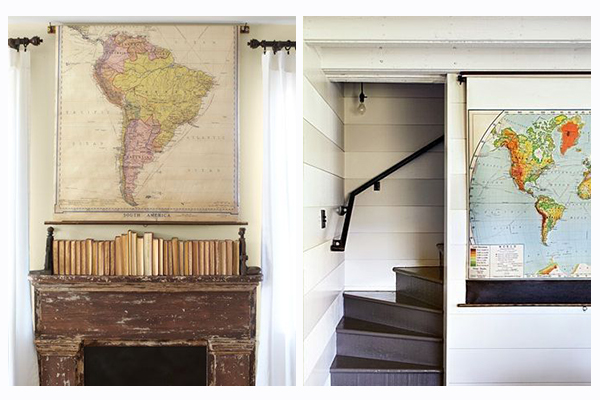 Vintage or modern, thrifted or found, a drop-down map to hide your flat screen is totally cool. While I cannot be certain whether or not these maps via Country Living and Erin Martin Design are hiding anything, I do love this drop-down idea as simple solution for hiding a flat screen. It’s such an easy fix and requires very little know-how to set up. Can we say weekend DIY? This cool vintage map as seen on Refinery 29 is also totally bad ass! I’d almost guess it wasn’t there, but we’re told there is actually a TV behind this one. I love the idea of an easy slide option. This rustic idea via houzz is great for a built-in television and hides the screen with a decorative edge. These great images from the Liz Marie blog are also ingenious. The barn doors add warmth and personality to the space and hide the TV in a totally new way. They soften the space and make accessibility a breeze. The possibilities using hanging art are endless, but I love this gorgeous design via blueggbrownnest. Framed artworks in a monochromatic palette are hinged together to cover up the TV monster. This clever solution to hide a flat screen is so inspiring. Two thumbs up!

What are your thoughts about mounting a television over a fireplace? Yay or Nay? We’d love to hear your thoughts. Be sure to follow us on Pinterest. We will be adding inspired ideas throughout the summer as I commence a living room remodel. Check back to see the finished product!!

I help high-performers organize their lives. Follow for my 3-step method + the Simply Spaced life.

What's your clutter type? Take my clutter quiz then DM me on Insta.

This blog post may contain affiliate links. If you use them, I may be rewarded credit or a commission of the sale. Please note that I only recommend tools that I personally use and love.